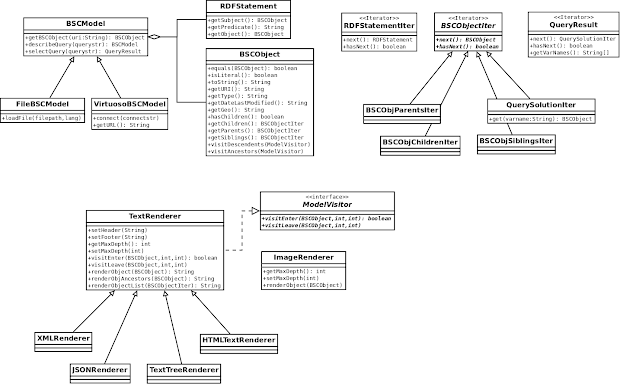 This simplified UML diagram illustrates the current architecture of the core BiSciCol classes. These classes are responsible for most of the lower-level BiSciCol functionality: interacting with data, working with queries, traversing the BiSciCol data structures, and converting BiSciCol data to other representations, such as XML. Note that this diagram does not depict all relationships or dependencies among the classes. Instead, relationships most important for a general understanding of the code are included, such as inheritance, interface implementation, and aggregation. Further, most private class methods and members are excluded for simplicity.

In general, we've been working to develop an architecture characterized by classes with clearly-defined responsibilities and a high degree of flexibility. We've also tried to develop objects that map naturally to the BiSciCol problem domain. For instance, both BiSciCol data objects and models are represented by corresponding abstract data types. Furthermore, the code that implements BiSciCol objects and data operations is completely separated from the code responsible for converting BiSciCol data to other formats, such as XML.

This is simply a snapshot of the state of the code at this time. Some of the classes illustrated above are incomplete and/or will almost certainly be redesigned. Collaborations between classes will likely change as well. Nevertheless, the diagram shows not only progress we've made, but also many of the design ideas we've been working with.
Posted by Brian at 12:04 AM