Computers are amazing at following instructions. So amazing, in fact, that a seemingly harmless instruction can potentially lead to an entirely false conclusion.
At our recent BiSciCol meeting at the University of Florida, we had a discussion about just such a case.

At its core, BiSciCol is all about connecting objects to each other. In order to accomplish connecting object identifiers to other objects, we have been using a simple relationship expression called “leadsTo” that indicates a direction in the nature of the relationship between one object and another. To illustrate how “leadsTo” works, lets provide a simple example. Suppose we have a collecting event, which we join to a specimen object using our relationship predicate “leadsTo”. The specimen object could then “lead to” a taxonomic determination, which could in turn “lead to” a scientist, and so on.

This is certainly useful as we can express an endless chain of objects and their derivatives , even if they exist in different databases. However, what if we extended the above example just a bit further, using our “leadsTo” relationship? 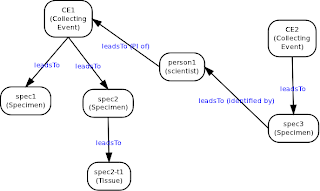 Uh oh--- By successively following the leadsTo relationships, we could now erroneously conclude that spec2-t1 came from spec3! This is not good! Fortunately, there is a solution.

We realized that the directional “leadsTo” relationship simply doesn't make very much sense in some situations, such as the connection between spec3 and person1 in the diagram above. Consequently, instead of the single “leadsTo” relationship, we actually need two relationship terms: one that has a distinct direction and one that implies no direction. Two terms are in use currently that do just this from the Dublin core standard: 1) relation (no direction) and 2) source (has direction).

In the first example above, we could avoid the problem entirely by describing the link between the taxonomic determination and the scientist as a non-directional relation. Using our new terminology, the graph would look something like this: 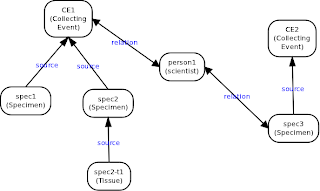 The computers involved in figuring out how to traverse the graph of relationships would know not to follow non-directional relationships and we would no longer infer that spec2-t1 came from spec3. Problem solved!


This post written by John Deck and Brian Stucky with input from Hilmar Lapp, Steve Baskauf, Andrea Thomer, Rob Guralnick, Lukasz Ziemba, Tim Robertson, Reed Beaman, and Nico Cellinese, summarizes a discussion that took place at the BiSciCol development meeting held on the March 31, 2012 at the University of Florida.
Posted by John Deck at 3:20 PM